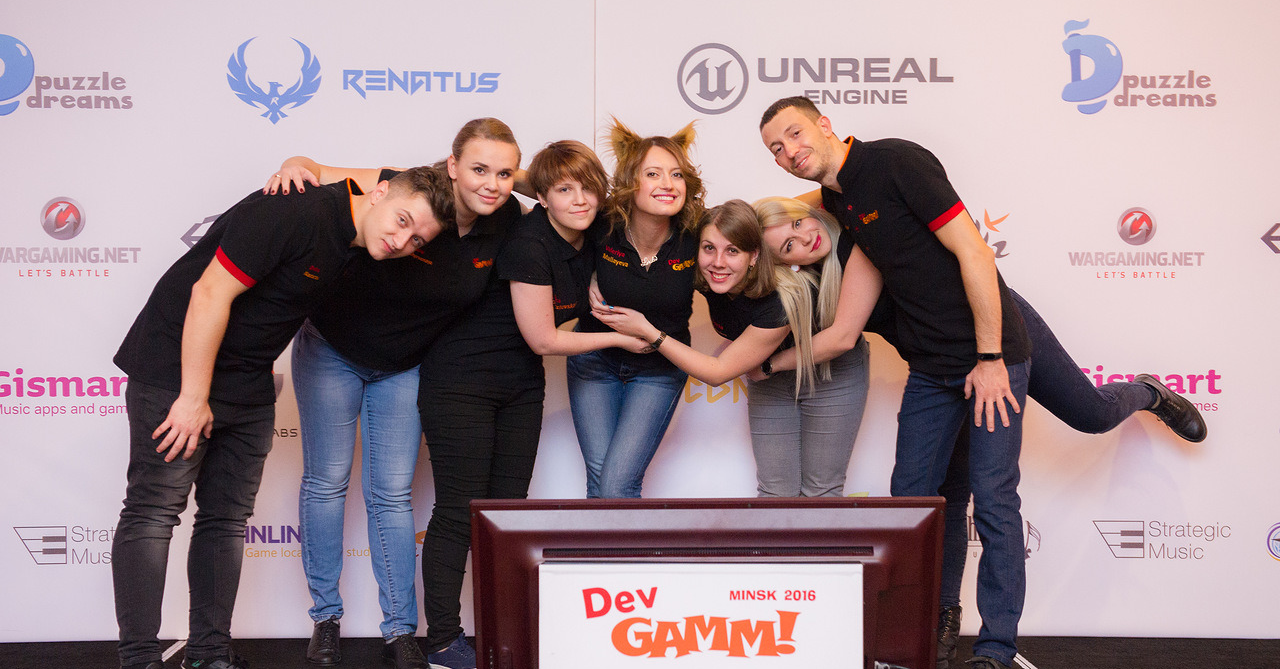 On November 10-11 Minsk hosted second DevGAMM conference this year, which gathered over 1300 participants. Sudden hype forced us to close ticket sales several days before the event, because we care too much about the comfort of our attendees.

Minsk event reached a new high. More than 60+ sessions, workshops, discussion panels encouraged knowledge exchange and helped many people to get answers to a whole bunch of burning problems.

The halls were packed during sessions of Chet Faliszek (game writer at Valve), Tony Watkins (general director of EA Russia), Petr Iwanicki (SUPERHOT developer), Jakub Dvorsky (creator of Machinarium, Samorost 3), Marta Dettlaff and Kacper Niepokólczycki (artists on The Witcher 3: Wild Hunt – Blood and Wine), Mike Hines (Amazon developer evangelist), Imre Jele (Surgeon Simulator and I am bread developer) and Alex Nichiporchik (tinyBuild CEO). That said, almost all conference sessions were crowded, as the attendance was very high this year. We are happy that we were able to touch upon topics to resonate with such a wide audience.

We got lots of positive feedback on Google Apps & Games Track and iOS workshop. It’s a sign that we need to broaden our cooperation with platforms.

First day was dedicated to game audio & sound track organized with the support of Archibaldi Studio. While the main theme of Yellow Hall on the second day was Art & Animation. We are thankful to Owl Studio team for helping us to pull this track together.

We are grateful to everyone who asked questions during sessions. Hope you took Pokeball away with you;)

All sessions will be available soon on our Youtube channel. Don’t forget to subscribe to be the first to watch them all.

“Communication works for those who work at it”

We all know that sessions aren’t the only attraction of the event. Networking is another big reason to go to events. You can easily find new connections via Pitch & Match system, but it’s not as much fun as going to parties.

Four (!) parties during three days offered more than enough possibilities for socializing. With preliminary registration you were able to get to Chartboost pre-party to pick up the badge beforehand, enjoy tasty Belarusian beer and dance to an awesome DevGAMM -Deadline band!:)

Speakers’ Dinner is the latest addition to DevGAMM agenda. Nordeus company created a special atmosphere where speakers could take a break from a busy day, discuss ideas and enjoy talking to each other. We really hope it will become a new DevGAMM tradition.

Official party was open to all participants and it was easy to get there by signing up for free bus. It was an endless flow of beer, food, dancing, conversations and cool music. Duo Loki opened the party with  melodic lounge tracks, while local band Minskoe More rocked the crowd with familiar dancing hits.

Parties are also the best way to close up the event with friendly hugs and promises to meet again soon. Renatus company invited attendees to mingle in Gold Sponsors area after the Awards and some of participants carried on the hangout at Epic Games & Vizor Interactive party.

“Life is more fun if you play games”

During the two days all conference attendees were able to enjoy over 60 projects at GAMM:Play Showcase. The developers received a lot of feedback on their games, talked with publishers, and proudly demonstrated their achievements.

The two streams of meetings at Speed Game Dating were productive both for developers looking for help with their games, and publishers scavenging for new projects. Participants of the event included Big Fish Games, tinyBuild, 505 Games, Creative Mobile, Zeptolab, Herocraft and other major players in the market.

This time Game Lynch or Pokelynch, according to theme, gathered experts, who took the whole thing very seriously. Though no one laid down on the stage or hid shoes, it still featured a lot of hilarious situations. For example, lynchers were throwing Pokeballs at each other during trial by combat. Or let’s just remember when developers drew out a huge bottle of alcohol and began to pour drinks to the audience which was a great example of how bribery works:)

The most important part of DevGAMM is two awards ceremonies. The first, People of the Year Award organized with the support of DTF.ru celebrated people and companies that contributed a lot to the development of game industry this year.

Pokemon was the main theme of the conference this year, so no wonder that it’s influenced a lot DevGAMM Awards ceremony a lot. The winners got their prizes from beautiful hosts Lerika Mallayeva and Yulia Vakhrusheva dressed as Pikachu, joined by Nikolay Andreev in Ash costume. Duo Loki closed the ceremony with a cover version of Everything is Awesome, which is basically an anthem of the conference.

“There is nothing new under the sun”

This was second DevGAMM during which all the attendees were able to download official conference app for Android and iOS created by Attendify. Thanks to it we were able to collect and analyze all of your feedback and improve the event. Make sure to keep it on your phone if you’re going to DevGAMM Moscow, because all the information from now on will stay in one place.

Preparing this event we tried to take care of as many things as possible to make your conference days enjoyable. Lots of you mentioned the convenience of floor navigation, appreciated the charging stations and treated yourselves to apples and bananas, kindly provided by Playkot company. Hug lovers really put to work ‘Free hugs’ sticker, that we will add to permanent collection.

Those looking for a job were able to choose from more than 100 job offers on Career Wall, sponsored by Riot Games and take part in the special training called Speed Interviews by Spice Recruitment company.

Unity Certification attracted 30 developers interested in confirming their knowledge of the engine. It was held for the first time in Russian and had the highest attendance rates in the region.

The conference would not be the same without the support of our sponsors. We want to express special thanks to Appodeal, Vizor Interactive, Playrix, Playtika, Epic Games, Renatus, Puzzle Dreams and others for helping us make the conference valuable for all participants.

Big thanks to our advisors, volunteers, press, indie community, patrons for your constant  support!

“Down from a mall, straight to the ball”

The preparations for the next DevGAMM conference to be held in Moscow on May 18-19 are about to begin. We are preparing to take up to 2,000 people, inviting more awesome foreign speakers and adding a few new formats! Follow the news.

Leave us again to come back,