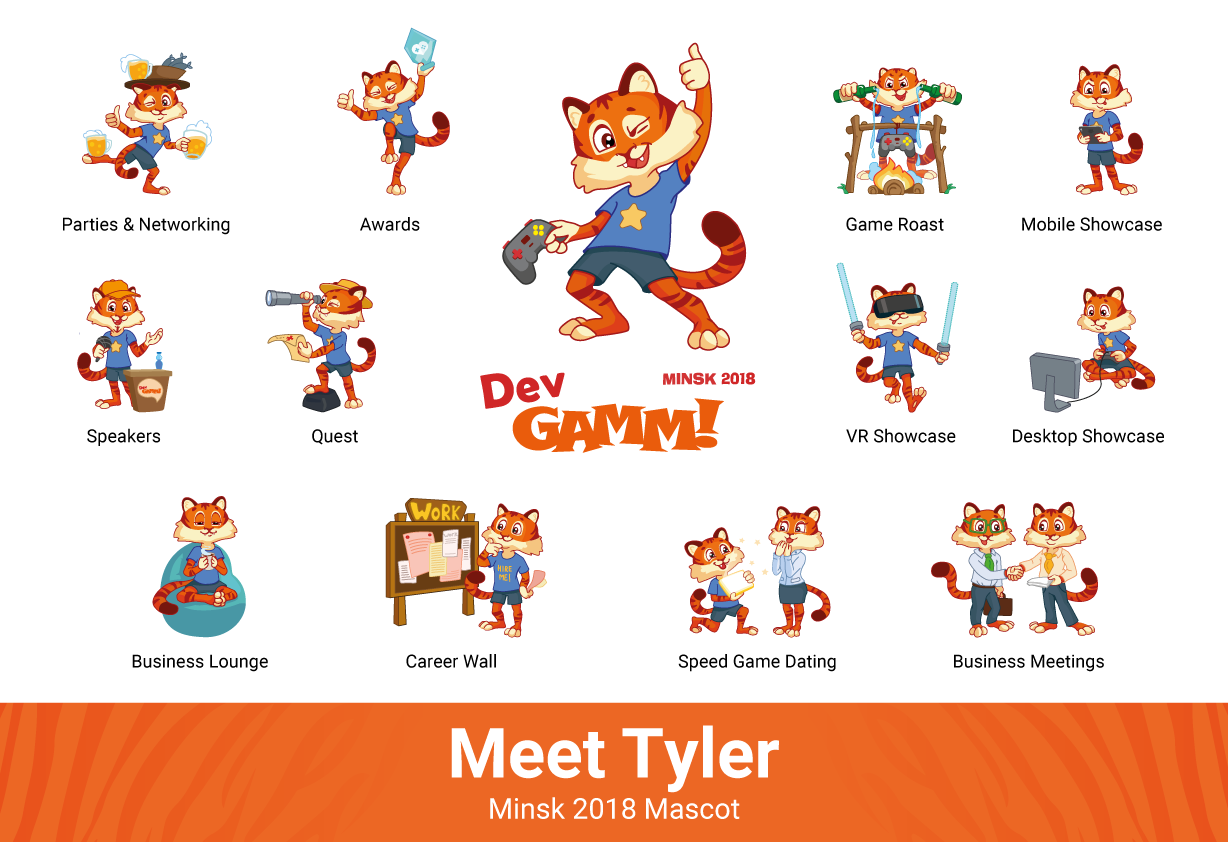 “TIGER, tiger, burning bright
In the forests of the night,
What immortal hand or eye
Could frame thy fearful symmetry?”

You all know that each conference we add a new symbol. Frankly speaking, it is always a hard choice for us. Mascot must reflect all the gaming activities and conference atmosphere. After a while, we’ve found the right character. We are pleased to introduce Tyler 🙂 We decided to name our mascot after Tyler ‘Ninja’ Blevins – the most followed streamer on Twitch. We also realised that our mascot has the same style as an American rapper Tyler, The Creator.

The stages of creation

We bet you want to know why our mascot is a tiger. Let’s reveal the secret. We are sure you all know our DevGAMM showman Taras Zhukov. Within DevGAMM team he calls each of us a ‘tiger’. Without hesitation we decided to present him a tiger costume for his birthday. Therefore we picked this character which is now associated with our naughty colleague 🙂

The concept of the character and all the sketches were developed by Alexandra and Ksenia. Anna completed the work in vector. In the first sketches, the artists were looking for the right proportions, age, and nature of the tiger. It was agreed to stop at the 4th sketch and make him nicer.

The artists spent a lot of time working on the main mascot. It was really important to show his nature, choose the right pose and emotions. When the main design was approved, Ksenia and Alexandra started to develop the sketches with activities. They tried to find dynamic facial expressions, details that will convey the right mood.

The next step was to choose a color palette for the mascot. It was also important to personalize him, add easiness and brightness to his character. Therefore, the artists decided to draw a star print T-shirt and jeans that complete the image of an impudent gamer.

Tyler is cheerful and joyful by nature. He likes to play games and collect achievements. But most of all he wants to farm platinum 🙂

Alexandra, Ksenia and Anna drew the inspiration from already existed DevGAMM symbols. The idea was to fit our tiger organically into the mascots’ line. ‘Disney’ or ‘Pixar’ cartoons, such as ‘Zootopia’ and the real photos of tigers and gamers were the best inspiration for them. All the variants were drawn in a raster graphics editor before the final image was picked. After that, Anna worked on it in vector, and Ksenia in her turn corrected some details to create one style of the mascot. Alpaca Games has opened recently but they started to work actively at projects right off. The members of the studio like to experiment in different styles. Alexandra, for instance, prefers realism, Ksenia – stylization. You can find other works of Alpaca Games on their website.

If you want to become an author of the next DevGAMM mascot for conference in Moscow and show your art skills – contact us at contact@devgamm.com

PS: add our new awesome stickers with mascot Tyler to your Telegram.