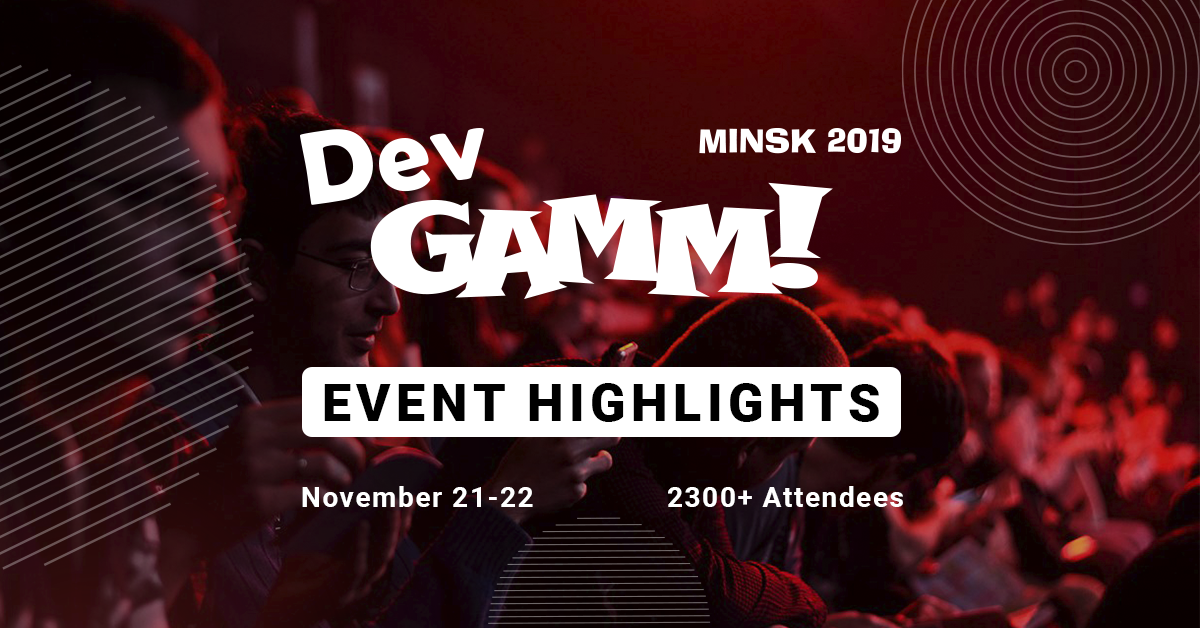 We hit a new record last week: 2300+ gaming industry professionals from over 40 countries visited the DevGAMM conference in Minsk Marriott Hotel and Falcon club on Nov 21-22. This is the most significant number of attendees in DevGAMM history!

We combined the facts about DevGAMM Minsk 2019 in infographics: follow this link to see it. The text below is all about our emotions and new things for the DevGAMM.

This time we had 70+ talks of different topics. Almost every game development specialist could see something new, find a solution to their problem, learn the experience of other developers, and discover the trends of the industry. The halls were full while amazing speakers from Larian Studios, Imperia Online, Ubisoft, Nintendo, Google, Facebook, 1C Entertainment, Voodoo, Wargaming, Sperasoft, Playrix, Unity, Gameloft, Game Insight, Plarium, MRGV, Saber Interactive and many others were on stage.

You will find the complete schedule on our website. If you are looking for a particular keynote, follow our Youtube channel: we’ll publish all the lectures there, section by section, until the end of 2019.

One of the most useful activities, as our visitors say, were the Roundtables with the industry experts, supported by Wargaming.net.

Open only by pre-registration, for a limited amount of attendees, the roundtables covered the hottest topics of game development, such as hyper-casual games, project management issues, investments and M&A, ad-hoc marketing, and in-app subscriptions.

For those who looked for feedback for their games, we had several different activities:

Those micro-events were also available by pre-registration only, but they are always popular among DevGAMM attendees. Well, can you find a better moment to catch the experts and get their honest feedback on your project? 🙂

Let’s add a couple of words about Xplore China Track from Mobvista and their partners. For two hours, the experts of the Chinese market shared their knowledge and analytical insights about games in China. The experiment went well, and the guests were happy! Photos from the event are here.

The official Unreal Engine party for Business, Speakers, and Media attendees took place in a new stylish location: OK16 loft space. We’ve organized several areas, including warm Shisha Lounge, two halls with live DJ-set, and a street food area with hip-hop music from the 90s. The guests made funny photos in the photo booth, danced, met new friends, and had a place for in-depth conversations with colleagues.

The tinyBuild pre-party had great success with its annual Poker Tournament and two DJ live sets. Our traditional Bye-Bye Mingle sponsored by Easybrain was the last networking event of the DevGAMM: it was the best moment to have a beer, share the memories, and hug your industry friends (by the way, here are the photos)!

We’ve also organized Girls & Games Lunch supported by Vizor Games. Second-year in a row, we invite 80+ women from the gaming industry to talk openly about work-life balance, leadership, mentorship, and the specifics of the industry. Do you want to know how it looks? Check the photos!

Together with TikTok and Httpool, we’ve organized Speakers and Industry Leaders Dinner at the end of the first day of the conference. The photos are also available on the DevGAMM Facebook page.

Thanks to the PINE Tool app, the DevGAMM attendees meet each other more than 2700 times in different locations of the conference. We had four lounges to meet and have a rest this time. One of the most memorable areas was sponsored by Playgendary team: it was called Quiet Lounge, and it was a perfect space for the guests to work in silence under green trees, play retro-games, or have a little snack.

Over 90 games from Russia, Ukraine, Belarus, and other countries took part in the DevGAMM Showcase within two days. It also featured games of future winners of the DevGAMM Awards: TOHU, Gripper, Get Access, Encased. Projects made with Unreal Engine and Unity engines received support and unique booths from Epic Games and Unity. Also, the Humble Bundle publisher was present at the showcase in an experimental format where anyone could directly contact the company representative at the showcase stand and pitch their game.

In Minsk, we awarded the winners of two significant game developers contests: Belkathon hackathon, organized by Belka Games, AppLovin, and Unity; and Unreal Contest by UE4, Disgusting Men, and Kefir.

At every event, we have a Livestream for those who can’t visit DevGAMM. This time it was produced by Disgusting Men focusing on interviews with developers, games, and exclusive stories from the conference. You can watch both days of broadcasting on our Youtube channel (day 1, day 2). Game Insight was the Titanium sponsor of the live stream.

What happened to Game Roast?

The format continues to evolve, and we decided to “turn the game around.” This time, our Awards Producer Taras Zhukov took over the organization of Game Roast. The initial plan featuring the most experienced indie developers during Game Roast and making it Game Roast All-Stars, has turned into a rebellion.

D.W.O., hacking of DevGAMM accounts, “strange” newsletters, weird t-shirts in the official DevGAMM Shop, and the inability to submit a game to Game Roast… All this was part of the big meta-game.

For one hour, the developers mercilessly “roasted” the Experts and their games. Thanks to them, the rules of Game Roast were reconsidered at the stage. Starting from 2020, developers will also have access to the screen during their Defense, and now both Experts and Developers will have 3 minutes to defend the game or to destroy it.

The best is yet to come!

At the end of the second day, the best games of the conference received awards and cash prizes from sponsors during the DevGAMM Awards. Thanks to our sponsors from Unreal Engine, tinyBuild, Royal Ark, Game Gears, the prize pool of the DevGAMM Awards this time was $30,000. The prize pool was split among all the winners, with the biggest amount for the winners of The Best Game nomination.

We also launched a new nomination with the support of Gismart: the winner of Best Hyper Casual Games received $3,000. Here you can see the list of DevGAMM Awards winners:

438 participants decided to compete for prizes in the DevGAMM Quest and complete the tasks of our sponsors in Minsk! The rewards were worth fighting for, including a Macbook Air, a DJI Mavic Pro quadcopter, a Nintendo Switch, AirPods Pro, an Nvidia RTX 2080 Super graphics card, and other prizes.

The Career Wall this time was simply gigantic, thanks to Pixonic sponsorship and our HR-partner VALUES VALUE. The wall featured 210 job offers in total, for all kinds of game industry specialists.

We would like to express special gratitude to our sponsors: thank you for participating and for the massive number of activities at your booths! Without a doubt, DevGAMM would not be possible without the support of Vizor Games, Epic Games, Belka Games, Easybrain, Playrix, tinyBuild, Xsolla, Unity, Gismart, Voodoo, Playtika, KamaGames Studio, ZAVOD Games and other sponsors. Big thanks also go to all our speakers, advisers, moderators, media, and volunteers!

We are preparing three major events for you next year:

Leave us again to come back🙂