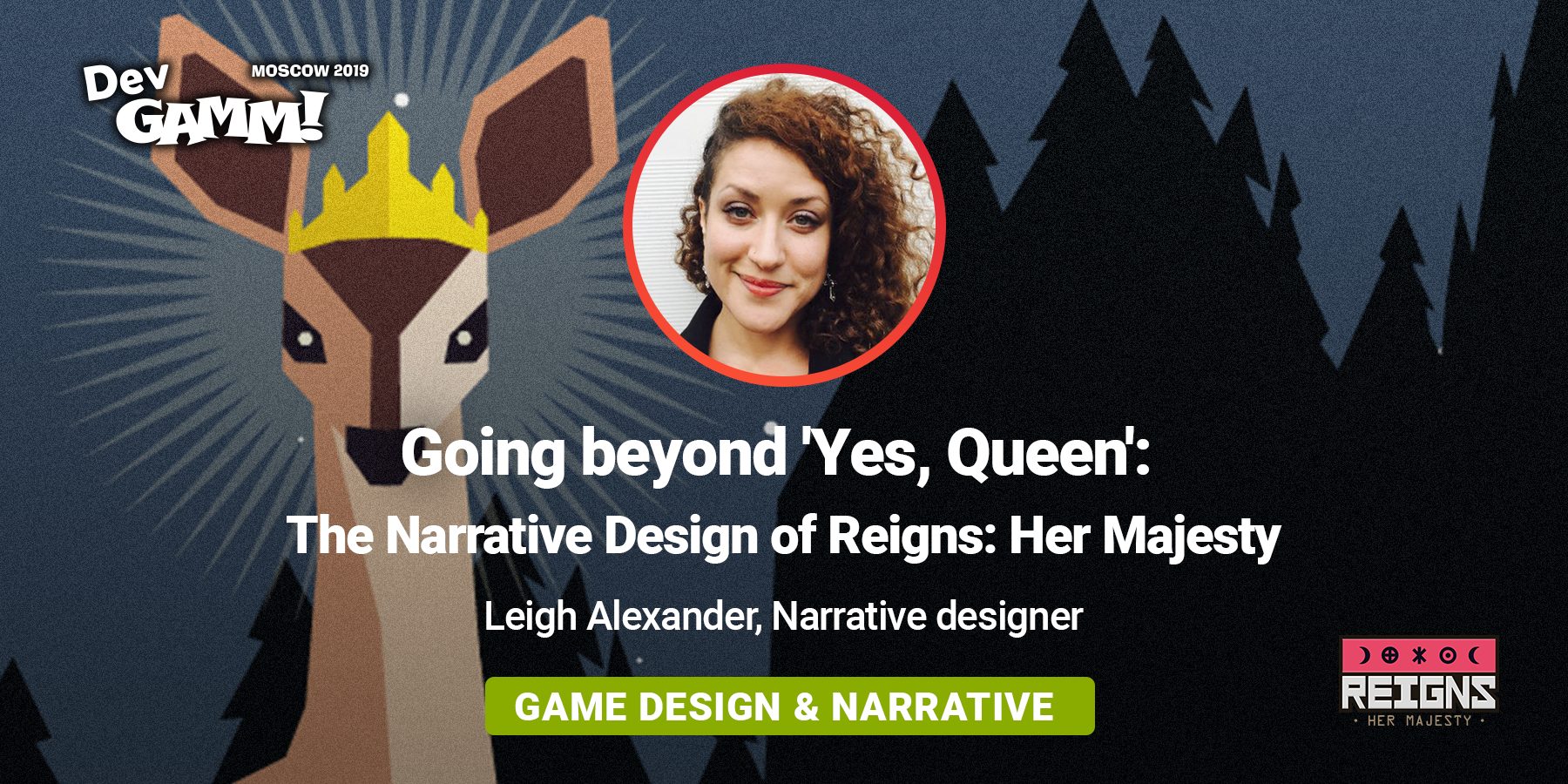 Breaking news! Leigh Alexander, writer and narrative designer of a famous project Reigns: Her Majesty, will present a talk within Game Design and Narrative track at DevGAMM in Moscow!

In the sequel to popular mobile kingdom management swipe-em-up ‘Reigns‘, the team wanted to push past “Yass Queen” and “go girl!”. Writer Leigh Alexander will share her narrative design process around the tricky political tightrope of women’s power, especially when it has to be both violent and funny, and she will touch on how procedural storytelling appeals to our fantasies of controlling the uncontrollable.

Leigh Alexander also worked on Where the Water Tastes Like Wine, Monitor. She also writes fiction and journalism (The Guardian, How We Get to Next, Medium, Motherboard) on futurism, digital society and other topics where the internet meets pop culture.

But that’s only the tip of the iceberg! Expect the sessions on game design and narrative from the representatives of Social Quantum, District Zero VR, Maginary, Soviet Games, Banzai Games, MyTona.

Also get ready for Workshop on game prototyping from scratch from INDIKATOR and Game Design Review from Wargaming.net.

During Game Design Review, Svyatoslav Torick and other experts will analyze the games that they received from developers prior to the DevGAMM conference. In total, 3 games will be reviewed. One hour will be devoted to each game. The entrance is free for viewers.

Moreover, Alexandra “Alphyna” Golubeva, Narrative Designer, Ice-Pick Lodge will be also among our speakers. Now she’s working on Pathologic 2. Published several comic books and stories, translated “Blood, Sweat, and Pixels” into Russian. The talk will describe Ice-Pick Lodge’s attempt to reinvent the game journal, turning it into a mini-game-like visual mind map that preserves and emphasizes the complexity of the plot while being more engaging to players than classic journals.

This is going to be breathtaking! Join us at DevGAMM Moscow and make sure to attend game design and narrative track!

The tickets are still on sale 😉

Game Roast: Fight for the Future

DevGAMM Attendee Guide: all you need to know